The Apple Watch Series 6 is arguably the best smartwatch you can buy right now, but as anyone with a good idea of how it works will tell you, it only makes sense if you have an iPhone. It’s also among the most expensive options available today, so buyers with an Android smartphone and those on a tight budget will want to look at different options. Although the smartwatch and fitness tracker segments were limited to a few big brands till a while ago, recent times have seen them grow rapidly with many new affordable options from small and upcoming brands.

One such product is the Fire-Boltt Beast, a new smartwatch and fitness tracker priced at Rs. 3,999. Bearing a striking resemblance to the Apple Watch series in many ways, the Fire-Boltt Beast will appeal to a buyers looking for an affordable but good-looking smart wearable. Key features include SpO2 and heart rate tracking, making this seem like an attractive option for the price. So just how good is the Fire-Boltt Beast in practice? Find out in this review.

The ‘bubbles’ style of app drawer is a familiar one, and quickly lets you access any app on the smartwatch

With a 1.69-inch screen, the Beast is nearly the same size as the 44mm variants of the Apple Watch Series 6 and Apple Watch SE, and looks very similar to them. It has a metal frame, but the area surrounding the glass sensor area on the rear is plastic.

There are a few other key differences which aren’t surprising given the price of the Fire-Boltt Beast. These include its traditional-looking lugs and straps, contact points for charging at the back, the rotating dial in the centre of the right side, and the shape of the screen itself, which doesn’t line up symmetrically with the face of the watch. The included charging cable attaches magnetically to the area around the contact points to charge the watch, and plugs into a USB Type-A port on the other end.

The black rubber strap that comes attached to the smartwatch is decent enough and offers a good fit, but you can easily remove it and attach aftermarket straps if you like. I found the Fire-Boltt Beast to be comfortable for continuous wearing, even while working out and sleeping.

Although large at 1.69 inches and with a claimed brightness of 500 nits, the display doesn’t cover the entire front of the smart watch; there is a significant strip of non-screen space at the bottom which looks a bit strange. When using watch faces that don’t have a black background, the lack of uniformity becomes quite evident.

The Fire-Boltt Beast is available in three colours – black, blue, and pink – and I definitely like the black one the most. The metal body of the watch has a nice brushed finish which looks good regardless of which colour you choose, but the black option is the most sophisticated and discreet. The rotating dial doubles up as a button, and feels good to operate with decent feedback every time you turn it one point in either direction. 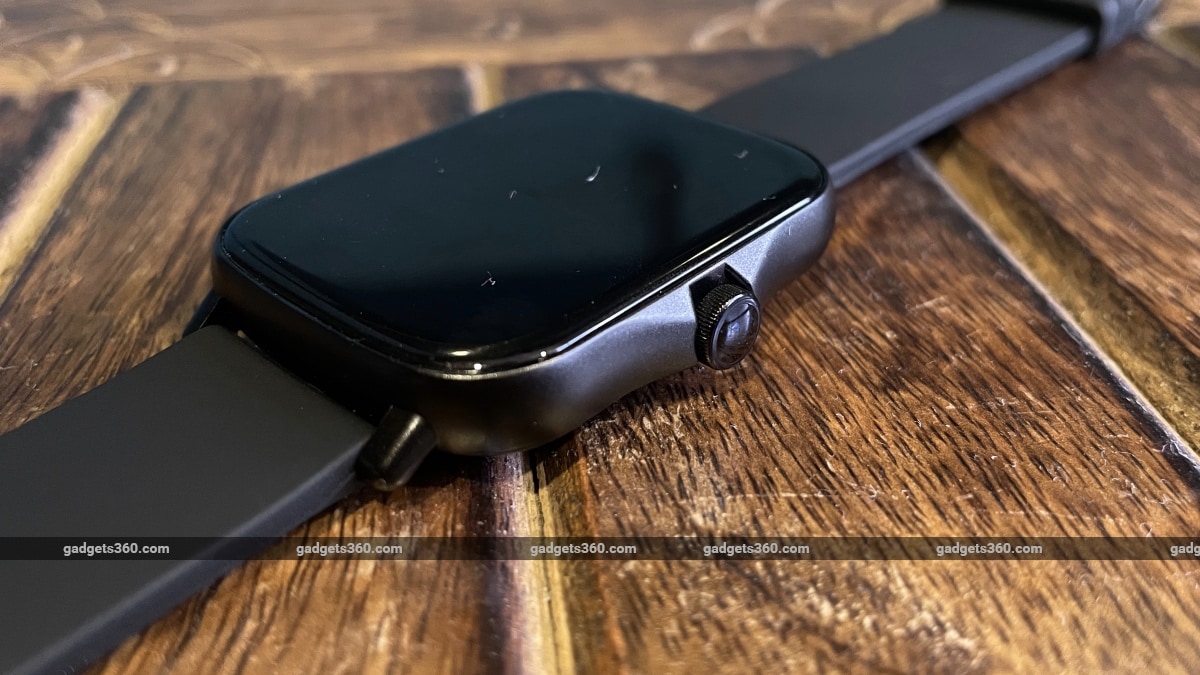 While you can use much of the fitness functionality without even connecting the Beast to a smartphone, detailed information and charts, settings, knowing the exact battery level, and the notification functionality will all need a continuous Bluetooth link.

The Fire-Boltt Beast is capable of step and sleep tracking, and also heart rate and SpO2 monitoring. It can control music playback and the camera shutter on your paired smartphone, and also show call, SMS, and app notifications for major apps including WhatsApp, Instagram, and Facebook. It’s even rated IP67 for dust and water resistance. You can also use the Beast to track different kinds of workouts, among other things.

The Fire-Boltt Beast runs its own custom software, with the UI design strongly inspired by Apple’s watchOS. Some of the key similarities include the bubble-style app drawer, the control centre and its icons, and some of the watch faces. Other watch faces borrow from those seen on smartwatches and fitness trackers from Amazfit and Xiaomi, among others.

Scrolling with the dial on the homescreen cycles through the saved watch faces, and pressing the dial button turns the screen on or off. Swiping from left to right shows the app drawer in bubble view; swiping from up to down brings up the control centre; swiping down to up shows the app drawer in list view; and swiping from right to left shows fitness and biometric data such as steps, sleep hours, and heart rate, along with other details such as the weather, and controls for your phone’s music player and camera shutter.

It all felt a bit awkward to use, and the watch often didn’t recognise swipes correctly, leading to the wrong screen opening for me. The smartwatch’s screen also doesn’t wake with a tap; you’ll have to either press the dial to wake the screen, or use the wrist raise gesture which didn’t always work properly for me. The built-in apps are oddly designed too, with fonts that don’t look too good, and no additional apps can be installed.

The Fire-Boltt Beast works with an app called Da Fit (available for iOS and Android), which syncs and charts fitness data, pushes notifications, and lets you change various settings and preferences including the watch faces, DND mode, and alarms. 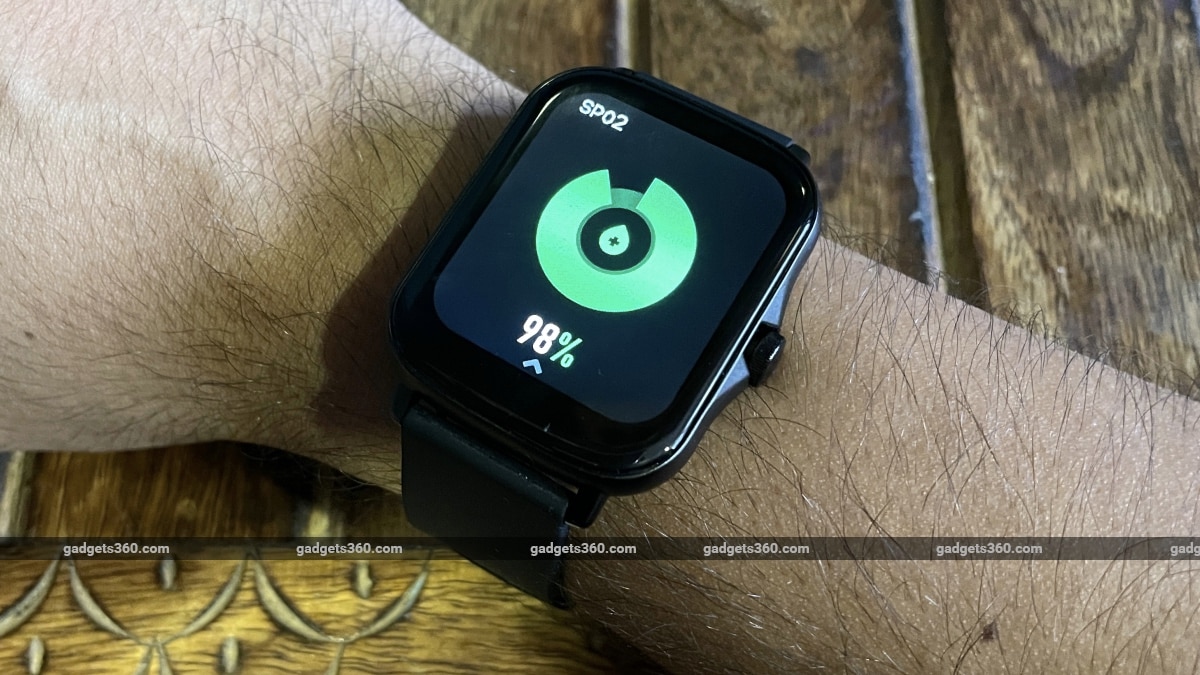 SpO2 tracking on the Fire-Boltt Beast is accurate, and is a useful touch in the current environment

You can download additional watch faces for the Fire-Boltt Beast, which are quickly transferred to the watch for use, but only one non-default face can be stored on the watch at any time. It’s a pretty good app in terms of design and ease of use. The connection between my Android smartphone and the Fire-Boltt Beast remained stable throughout the review period.

Many smartwatches and fitness trackers from manufacturers that also make smartphones tend to work best (or only) with devices from the same brand. In comparison, the Fire-Boltt Beast is device-agnostic, and is designed to work well with Android as well as iOS, and even on its own. I had the smart watch paired to an Android smartphone for this review, and didn’t have any trouble with functions that relied on this connection, including call alerts and notifications, synchronising of fitness data, and more.

Strangely though, the Fire-Boltt Beast doesn’t need to go through a traditional pairing process on startup, as is usually the case with wearable devices. The smart watch booted normally and gave me access to all of the on-device features straight away. In fact, there were already some steps logged in the step tracker; my initial thought was that the review unit had been used, but the package was completely sealed and the device looked brand new.

Since there were no pairing instructions on the watch itself, I had to look at the included pamphlet to figure out how to go through the process. It’s easy enough once you know what to do, and didn’t take me too long to complete. That said, you don’t strictly need to pair the Fire-Boltt Beast to a smartphone, or indeed even keep it connected all the time.

The preinstalled watch faces worked well, with dynamic information such as steps, distance, and the date shown on the screen, but some of the faces had complications that were entirely static and non-functional, particularly the ones designed to look like Apple Watch faces. 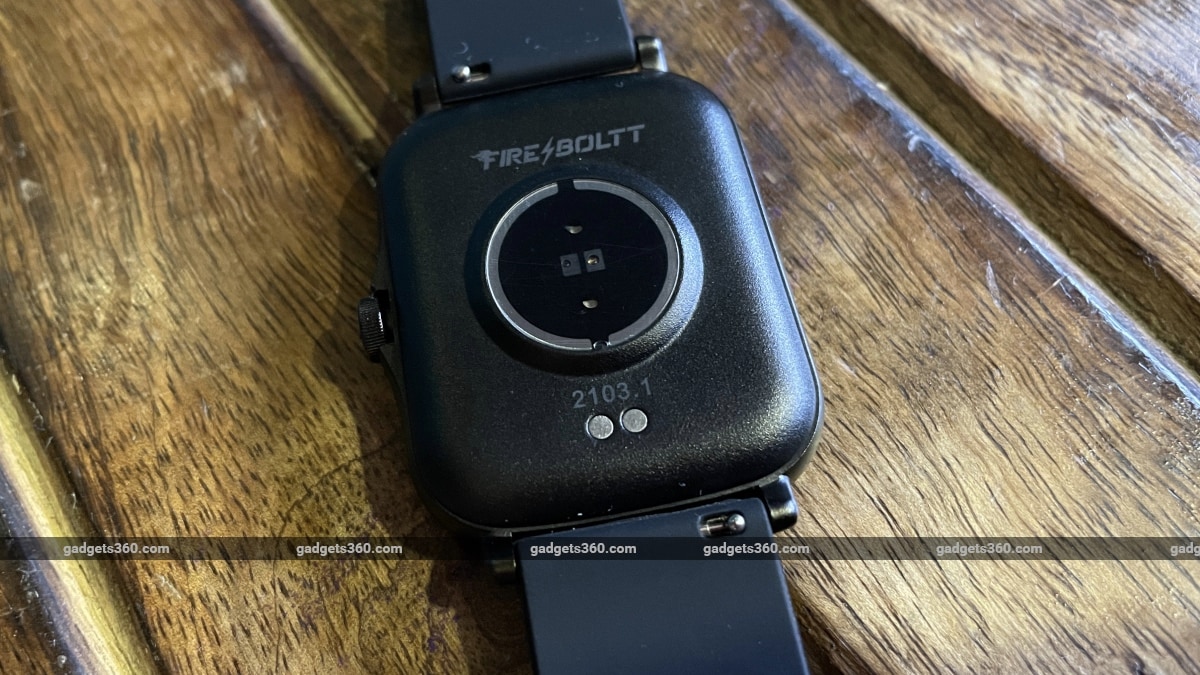 The bottom of the Fire-Boltt Beast is plastic, and there are traditional lugs so the straps can be replaced easily

The Fire-Boltt Beast is capable of step, heart rate, SpO2, and blood pressure tracking, of which the former three worked well in my experience. When manually counting 1,000 steps, the Fire-Boltt Beast measured 1,028 steps – an error margin of around 3 percent over a relatively low step count. Measured against an Apple Watch Series 5 over 4,000 steps, the Beast measured 200 steps more than the Apple Watch.

Heart rate and SpO2 tracking on the Fire-Boltt Beast were accurate, when measured against the Apple Watch Series 5 and a standard fingertip oxygen saturation monitor respectively. The watch takes around a minute to ascertain an accurate heart rate reading, at first showing me strangely low levels immediately after a workout, but eventually catching up to the correct heart rate. Sweat around the sensor seemed to be causing this issue.

While the Beast also claims to be able to measure blood pressure, I wouldn’t put too much faith in the readings since this uses the sensor on the bottom of the watch. These readings seem to be very rough estimates, rather than the more accurate readings that you can get from dedicated monitors. There is sleep tracking as well, which is basic but decent enough for the price of the device.

There are a few other useful apps, including the Shutter and Music apps which work well. The former lets you use the smartwatch to control the shutter of the camera on your paired phone, which can come in handy when you have the phone on a tripod or stand. The latter lets you control music on your paired smartphone. The flashlight app turns the screen of the watch bright white for a bit of light in dark rooms. There are also apps for the stopwatch, alarm, and timer on the Fire-Boltt Beast. There’s even a ‘Breathe’ app that tries to work like the rather soothing one on the Apple Watch, but it’s a weird and silly reproduction at best.

The Fire-Boltt Beast has a claimed battery life of eight days on a single charge. The real-world figure is considerably lower; I got around three days of use per charge under my typical usage conditions, which includes regular fitness monitoring, notifications throughout the day, and sleep tracking at night. The smartwatch is quick to charge through, topping up from zero in less than two hours when plugged into my laptop.

It isn’t surprising to see other manufacturers draw inspiration from Apple’s designs and software. The Fire-Boltt Beast bears a strong resemblance to the Apple Watch, but trained eyes will of course be able to tell the difference between the two quickly. To the untrained eye or from a distance, you could easily fool people into thinking you have an Apple Watch; this is a good-looking smartwatch.

In terms of function, the Fire-Boltt Beast is a budget smartwatch, but that isn’t a bad thing here. At Rs. 3,999, it’s decent for the price with reasonably good step, heart rate, and SpO2 tracking, and a few other features that users will find useful. Although I found some of the watch faces and navigation in general a bit awkward, the overall experience was decent enough.

Are Apple Watch SE, iPad 8th Gen the Perfect ‘Affordable’ Products for India? We discussed this on Orbital, our weekly technology podcast, which you can subscribe to via Apple Podcasts, Google Podcasts, or RSS, download the episode, or just hit the play button below.

Affiliate links may be automatically generated – see our ethics statement for details.