Welcome to our live report of the fourth day of the first India-England Test from Chennai. Join us for updates, analysis and colour. You can find our traditional ball-by-ball commentary here

*Most recent entry will appear at the top, please refresh your page for the latest updates. All times are local.

England won’t enforce the follow-on despite bowling India out with a lead of 241. Spectacular, low, one-handed, diving catch at slip from Stokes to finish things off after Anderson drew an outside edge from Bumrah’s loose shot.

The bumper does the trick for Anderson, with Ishant fending him to short leg. According to ESPNcricinfo’s ball-by-ball length data, that was his first Test wicket with a ‘short’ ball since the Boxing Day Test of 2017-18, when Tim Paine dragged one onto his own stumps. Washington Sundar is going to play his shots now, as India look to reach the follow-on target – though I think England would probably decide to bat for a session or so regardless.

.@Sundarwashi5 smashes 13 off Joe Root’s over

This surface doesn’t appear to have deteriorated much at all since the second morning, as evidenced by a ball in the 90th over. Jofra Archer drew Washington Sundar forward with an 86.7mph/139.5kph ball in channel outside the off stump, earning a genuine edge. But there is so little pace and carry in the pitch that it bounced barely six inches behind the bat, and reached Stokes at slip just before its second bounce. That will be a bonus for India, as it is increasingly difficult to see how they can lose another 13 wickets. Sundar now has his highest Test score, too.

That said, there is definitely extra bounce on offer for the spinners with the new ball. Leach has his second, finding some turn and bounce away from the bat, with Nadeem steering to slip via the shoulder of the bat.

Nothing much happening with the new ball for England’s seamers, so Root throws the new ball to Jack Leach less than five overs after it has been taken. He strikes with his second delivery: extra bounce from a length with the harder ball which takes Ashwin by surprise as he lunges forward, hoping to smother the spin, and the ball loops up towards the vacant silly point region. Jos Buttler gets across to take the catch, and the 80-run partnership is broken. Shahbaz Nadeem, at No. 9, is still a useful batsman, but England are into the tail.

Poor start from England’s spinners, and for Bess in particular. Too many balls were either overpitched or back-of-a-length in his three overs this morning, and India have added 27 in six overs, with Sundar reaching his second Test fifty with a cover drive off Leach. The new ball is available: if these two can survive the first 10 overs or so against it then India will grow increasingly confident that this Test can be saved.

A useful unbroken stand of 32 between R Ashwin and Washington Sundar last night has given India hope of avoiding the follow-on, but there are only six overs until the new ball is due this morning, and England will be hopeful that James Anderson and, in particular, Jofra Archer can break the stand when it arrives. With 15 minutes to go until we get underway, there’s plenty of time to catch up on last night’s Polite Enquiries below, or any of the rest of our overnight content. 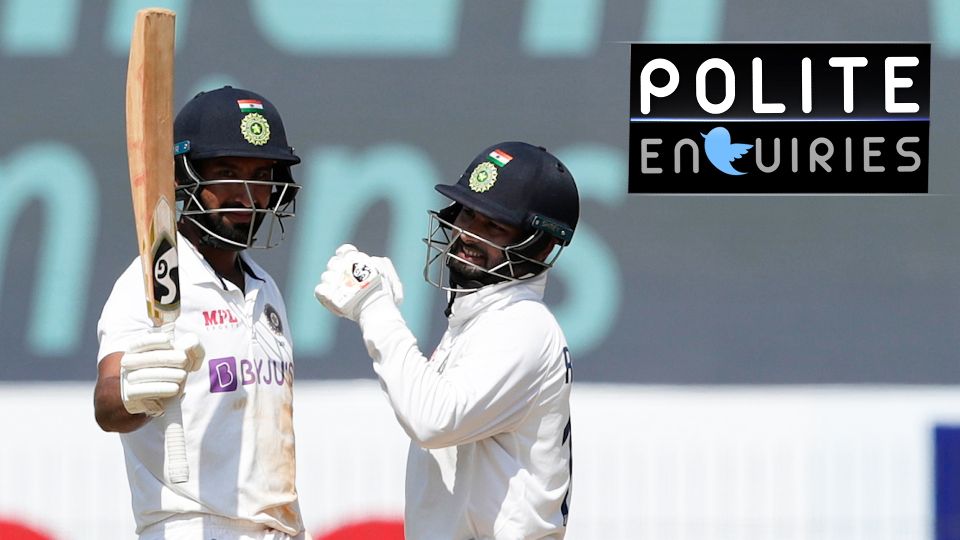 
Matt Roller is an assistant editor at ESPNcricinfo. He tweets at @mroller98