Crude has been climbing steadily since late last year on coronavirus vaccine hopes and as output curbs produced a tighter market.

Oil climbed to the highest level in over a year as tightening global supplies and signs of strength in physical markets aided crude’s virus-recovery rally.

Futures rose 2.3% in New York, earlier rising above $55 a barrel for the first time in a year. Crude has been climbing steadily since late last year as coronavirus vaccines and producers’ supply curbs boost expectations of a tighter market. OPEC and its allies expect to drain an oil surplus by the middle of the year.

Meanwhile, there continues to be signs of strength in the market for physical barrels of oil, with Royal Dutch Shell Plc bidding for more cargoes of benchmark-grade North Sea crude on an S&G Global Platts pricing window. The bids come a day after the oil major staged the heaviest buying by a single company since at least 2008.

“There’s hope around the vaccine rollouts at the same time we’re seeing a lot from the majors and international players about cutting back on production,” said Gary Cunningham, director at Stamford, Connecticut-based Tradition Energy. “Those two factors are combining to keep us toward the upper end of the range.” 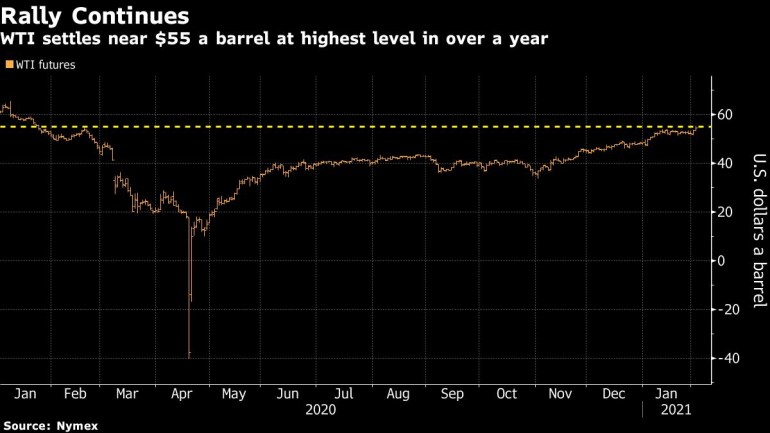 The rally in headline crude prices and buying binge in physical markets comes amid a markedly tighter structure in the oil futures curve this year. Nearby Brent timespreads are trading in their biggest backwardation in a year — a bullish structure where nearer-dated contracts trade at a premium to later-dated ones — suggesting supply tightness.

Last month’s pledge by Saudi Arabian Energy Minister Prince Abdulaziz bin Salman to slash production by a further 1 million barrels a day has buttressed global markets. On Wednesday, a panel that oversees OPEC’s strategy — the Joint Ministerial Monitoring Committee — will convene online to assess the outlook. The JMMC is unlikely to recommend new policies, which will instead be tackled at the next full OPEC+ meeting in early March.

In the U.S., analysts are expecting domestic crude inventories declined last week, according to a Bloomberg survey. The industry-funded American Petroleum Institute will report its figures later Tuesday ahead of the U.S. government’s storage tally on Wednesday.

Still, technical indicators point to prices being due for a pullback, with both Brent and WTI settling above their upper Bollinger bands. At the same time, the near-term impact of the pandemic on demand limits how far crude’s rally can extend. Even amid a spate of unplanned refinery outages that would normally boost gasoline prices on the U.S. Gulf Coast, they are barely causing a ripple as the pandemic continues to cap fuel demand.

“When you start to get to markets like oil and natural gas, the liquidity is substantially larger and it becomes that much more difficult to do,” Currie said. “To be the marginal driver in these markets like they were in silver yesterday, is a much larger question mark.”