In one of his recent videos, he called Congress MLA Ninong Ering a ‘non-Indian’. He had also claimed Arunachal Pradesh to be not a part of India, but that of China.

After, this incident, Varun and Rajkummar shared the screenshot of a news article that was originally shared by Stree director Amar Kaushik where Aman wrote “Being ignorant about your country and its region is stupidity in itself, but when that ignorance is expressed in an offensive manner, it becomes toxic. We all need to call out and condemn such ignorance in one voice and make all idiots understand that IT IS NOT ACCEPTABLE ANYMORE.” 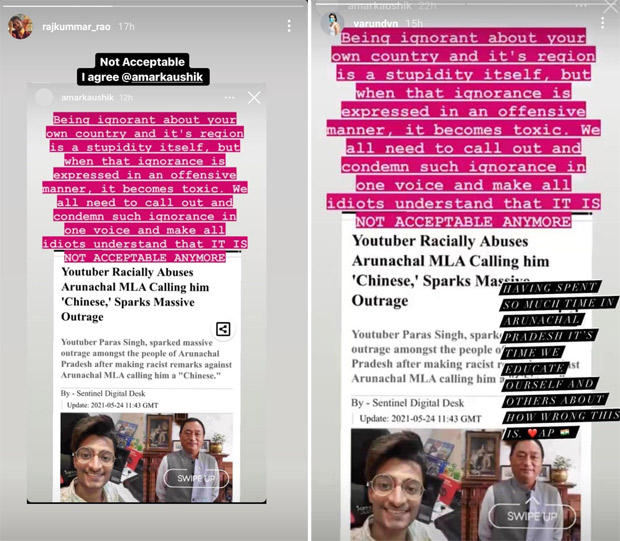 Sharing the screenshot on his Instagram story, Varun wrote “HAVING SPENT SO MUCH TIME ON ARUNACHAL PRADESH IT’S TIME WE EDUCATE OURSELF AND OTHERS ABOUT HOW WRONG IT IS.♥️ AP ” Varun Dhawan has been fond of the state since the time he shot for Amar Kaushik’s Bhediya in Arunachal Pradesh with Kriti Sanon. He also spent time with his wife Natasha Dalal in the state and donated an amount of Rs 1 Lakh to a village suffering from Forest Fire.

While RajKummar wrote, ” Not acceptable I agree @amarkaushik.” sharing the screenshot.

Paras has now apologized in a separate video. He was recently also arrested in Punjab.

Talks between producers of Sooryavanshi and exhibitors reach

Matthew Perry and fiancée Molly Hurwitz call off their